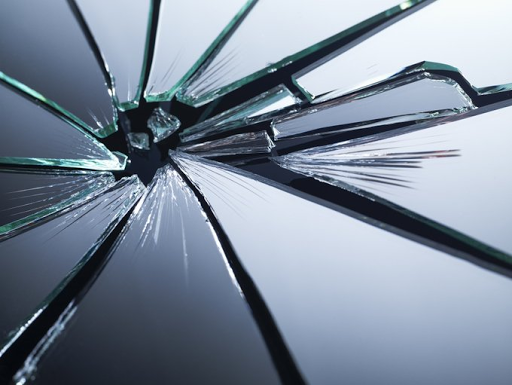 Email ThisBlogThis!Share to TwitterShare to FacebookShare to Pinterest
Labels: Guvna 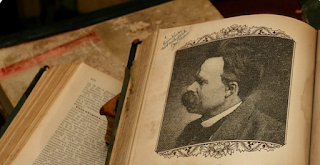 Email ThisBlogThis!Share to TwitterShare to FacebookShare to Pinterest
Labels: Waur 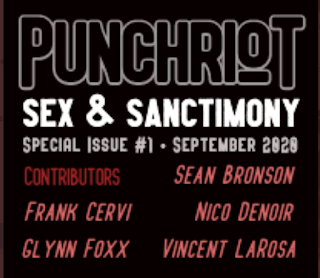 Here's the link to the website where you can purchase a copy.

Email ThisBlogThis!Share to TwitterShare to FacebookShare to Pinterest
Labels: Her face was good but I don't remember her ass

My non-fiction piece, "Why you will never be able to endure a chinese-style lockdown," was published in the june 13th edition of expat press. 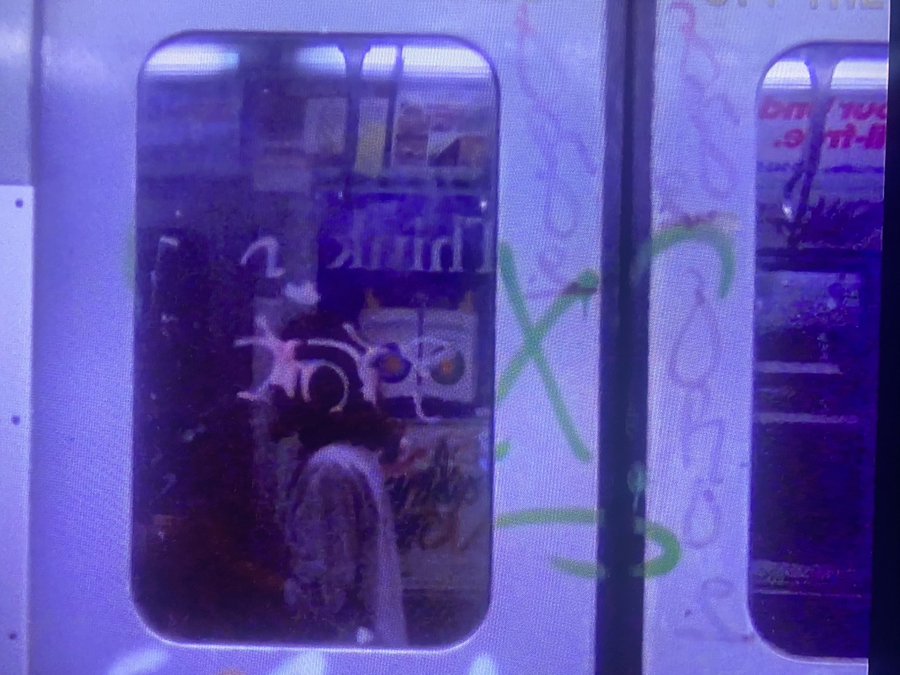 Email ThisBlogThis!Share to TwitterShare to FacebookShare to Pinterest
Labels: "WHY YOU WILL NEVER BE ABLE TO ENDURE A CHINESE-STYLE LOCKDOWN", Non-fiction, Publications 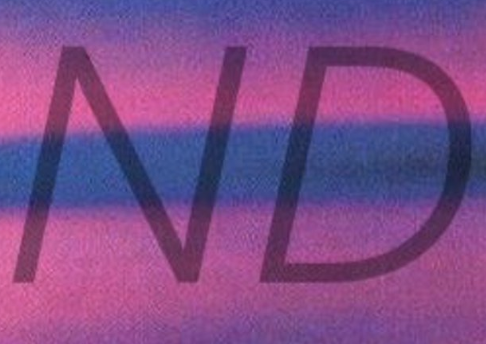 My four poems, "Living in Chinese: Golden Week," "Living in Chinese: Xi Jinping as Winnie the Pooh," "Hegelian Dialectic," and "Driving Against Traffic" were published in one of the May issues of Nauseated Drive. https://nauseateddrive.tumblr.com/post/618667236875534336/4-poems-by-sean-bronson-living-in-
at June 08, 2020 No comments:

Aside from being grabbed in the ass by two separate Chinese female staffers at the Beijing airport, my flight back to Los Angeles was uneventful. The first grab was more like a pat down. I was going through the "security" check-in where you have to put all your belongings in a gray tray. While your check-in luggage of lab top, kindle, cellphone , belt and wallet get examined by a technician who stares at a gray and white screen, a young Chinese girl in her early twenties patted me down with her wand. Down the outer thighs and then, up the inner thighs. To keep me in place, from moving away from the yellow shoe marks on the platform, she held my left cheek. Then slid her hand down like she was brushing off some lint off my butt. But in reality, she was pretending to see if there was anything in my back pocket. I was facing away from her.

The second time, which happened a few minutes later, was because I had a portable battery charger. I didn't understand this was the reason they were taking me away to a different area. They were speaking Mandarin, and I don't speak Mandarin even though I've been living there for one year. This is where women are subtle but not so subtle when it comes to ass-grabbing. I go up to the counter accompanied by some short-haired Chinese girl with dyed-brown hair. As I say to the young Chinese guy, "Hi, sorry, I don't speak Chinese. What's the problem?" I feel a thumb and index finger on my left cheek again. It is a very light squeeze like she is pretending to bump into me.

I register this into my brain while the Chinese guy explains that since the printed information of the wattage and voltage of the portable battery charger has faded away, they must confiscate it. From the ass grab, and the weird airport regulations, and the desire to hurry up and get on the plane, I just ask if they have to take it away. They say yes. And I just give an okay with an undertone of "if you have to take it, then do it, but I am not totally okay with it." But I am not sure if that registers with the Chinese guy.

When I turn around, the girl is gone. And I wonder if the two girls were in on the conspiracy together. And now I wonder if this is something these girls do when they get bored.

(This happened on January 12th, before any news of the outbreak became an international story.)
at February 08, 2020 No comments:

Email ThisBlogThis!Share to TwitterShare to FacebookShare to Pinterest
Labels: Non-fiction

Bangkok Blues: These are the Songs They Listen To

If you're ever interested in sobering up to the dangers of living in Thailand as a foreigner, check out Farang Deaths. It's a website that lists and describes the mysterious and unusual ways  foreigners die in Thailand. From falling off an eighteen story buildings to having (been) drowned in a shallow pond, there's always something left to be desired in each of the accounts.

Take, for instance, Jean-Claude Arnaud Dubus, a French Embassy deputy information officer who died at a BTS station in Bangkok. The following includes a stated account from one of the guys in charge of the investigation: '“He proceeded onto the 3rd floor and could be seen on the recording climbing over the railing.” Mr Dubus then fell to the ground and was found by a pedestrian about five minutes later, police said.' 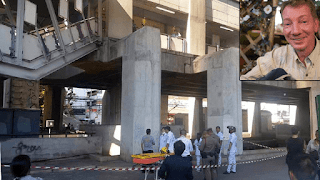 The first thing I thought when I saw the photograph was that it wasn't very high up. If you're going to do something like that, wouldn't you want to make sure? Also keep in mind, the death occurred at a BTS station which is Bangkok's skytrain. That's a strange place to die unless you're jumping unto the tracks or something. I guess he was just another ugly, lonely, fat, old retiree who had nothing to live for. Then you read at the bottom: "Mr Dubus, who was married to a Thai wife, had been living in Bangkok since 1989. He worked as a well-respected journalist and researcher with a focus on Buddhism and politics. In 2018, he became a deputy information officer at the French Embassy in Bangkok."

Deputy Information Officer at a French Embassy? The second to last sentence peaked my interest a little. So I clicked on the link to his passing at the Foreign Correspondents Club of Thailand website: "Arnaud was described in press reports as a French diplomat due to his recent employment as deputy information officer at the French embassy." In other words, that was what the the newspapers said, but he was really mostly a journalist. In fact, he is stated as being a "second vice president in 2017" of the Foreign Correspondents Club of Thailand. 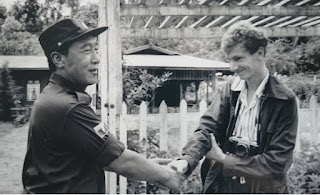 The photograph and the heading underneath is quite amazing. "Arnaud Dubus meets Khun Sa, the well-known opium warlord in Ho Mong, Shan State, Myanmar, in 1990." Then, I read some of the newspapers he reported for and the subjects he wrote on, and I knew he wasn't just some business writer who wrote about the stocks prices of the day.

Then, I googled his name and things got even weirder. On one hand, there were articles and copies of articles detailing the financial problems of Arnaud, therefore implying that he killed himself. On the other hand, he had written some explosive article on a Malaysian Deputy Prime Minster Najib Razak. 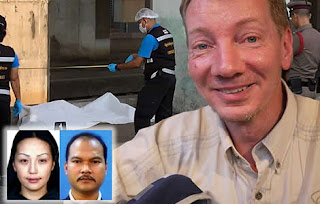 "A book author and investigative journalist, he published a compelling exposé in 2009 detailing the horrific murder of  a Mongolian woman and mother at the hands of elite Malaysian police officers. The men were subsequently convicted but Arnaud Dubus revealed links to corruption and the former Malaysian Prime Minster Najib Razak currently on trial facing seven charges of abuse of power and money laundering in Kuala Lumpur."

It should be stated that even though the article was written in 2009, the case has yet to go to trial: "Former Malaysian prime minister Najib Razak says he shouldn’t be blamed for the multi-billion-dollar 1MDB scandal, and declares he knows nothing about money from the state fund appearing in his personal account."